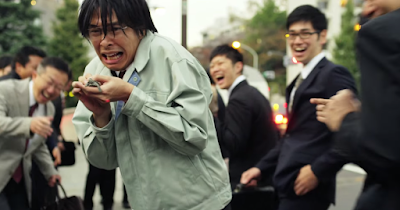 Great films make you feel like you’ve journeyed a thousand miles in just a few short hours, and few directors are able to succeed at this like Sion Sono, one of the best genre-mashers working today.  One of his latest films, Love & Peace, is no exception to his tendency to throw everything and anything he can think of into every film of his, starting out as a hapless loser-turns-winner story, and morphing by the end to encompass elements of pop-rock-band films, kaiju flicks, and even Christmas tales.

Ryoichi is so patently pathetic at just about everything in life that even big-name newscasters see fit to call him out on national TV.  His coworkers mock him remorselessly, sticking “hazardous waste” signs on his back, and he can’t escape the feeling that even strangers on the train stare at him with open contempt.  There are signs of mutual affection between him and a coworker, a woman named Kumiko, but both are too shy to say anything directly.

He starts to find a bit more courage when, on a whim, he buys a small pet turtle as a companion.  Searching for a name, he takes “Pikadon” from a news show he happens to be watching at the time, not realizing that the word is actually a popular nickname for nuclear weapons.  He opens up to the turtle, revealing to him his love for Kumiko and his ultimate dream of getting back into music and becoming a big enough star to play in the new Tokyo Olympic Stadium under construction.  Of course, as soon as his heart starts to rise, he gets smacked back down; his coworkers up the cruelty when they find out he carries around Pikadon in his shirt pocket (it’s really a very small, and adorable, turtle), and the teasing only worsens from there.  In a fit of pained madness, Ryoichi flushes Pikadon down a toilet, and instantly regrets doing so.

While the adorability of the turtle makes this scene legitimately painful to watch, never fear- Pikadon survives the trip and finds his way to an underground paradise where abandoned toys and pets gather.  An old homeless drunkard takes care of them, repairing the toys as best he can, and uses his strange magic to breathe life into the toys and allowing them and the animals to talk.  When he tries to give the same power to Pikadon, he inadvertently gives him the power to grant wishes, and Pikadon soon starts using this power to grant Ryoichi’s wishes of stardom, and also begins growing at a prodigious rate.

It’s every bit as crazy as it sounds, and just as much fun too.  Sono as a director is many things, but boring is not one of them, and this movie ricochets from each bizarre plot point to the next like it has rockets strapped to its feet.  Few directors would dare try to create an ending exactly 50% Kaiju rampage and 50% magical Christmas fairy tale, and fewer still could make it work, but to the film’s credit there was never a moment where I caught myself thinking, “Nah, this part here doesn’t fit with the rest.”

Sadly, unlike some of Sono’s previous masterpieces like Love Exposure, this one can’t quite rise above its pulpy origins into something greater than the sum of its disparate parts.  Ryoichi is never less than fascinating to watch, as Hiroki Hasegawa commits to every tortured twitch of his eyebrows, but his shifts between being comically pathetic and absurdly egotistical often happen at the drop of a pin.  It doesn’t detract from the performance, but it does make it extremely difficult at times to root for him.  The love story he has going on in the background with Kumiko could have been pretty interesting, but she gets very little screen time, and their relationship is often sidetracked completely for long stretches of time.

Because of this, despite its manic energy, it’s a less groundbreaking movie than one might expect, but that in no way lessens how enjoyable it is to watch.  It’s cheesy as shit, but not without moments of doubt and melancholy in its characters that serve to remind us that, no matter how perfectly our wishes might be fulfilled one year, there will always be another Christmas next year that could bring it all tumbling down.