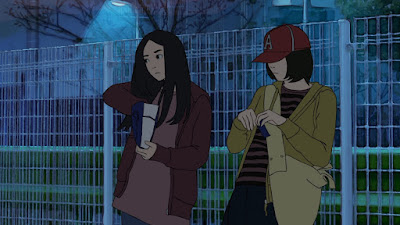 The Case of Hana & Alice, possibly my favorite film from this year’s Nippon Connection, is a bit of an oddity, a late-in-coming animated prequel to a previous live-action work of the director’s called Hana & Alice, which came out in 2004.  That might sound like a strange disparity to balance, but the good news is that Iwai handles his characters well enough that you don’t need to have any familiarity with the first film to enjoy this one to its fullest.  It’s a remarkably magical and relatable coming-of-age tale that made me dearly wish I’d had as devoted a friend as Hana when I was Alice’s age.

Alice and her divorced mother have moved from the city to a small town, and are in the midst of trying to start new lives for themselves.  In what starts out as a typical fish-out-of-water, new-kid-in-town tale, Alice struggles to gain friends and acceptance at her school.  Part of this, she learns in a strange encounter with the most popular girl in class, is because she was assigned the desk of a student that died a few years before.  The details she’s told make little to no sense (most assure her it had something to do with the kid’s “four wives”), so Alice takes it upon herself to try and figure out what exactly happened to the boy.

This soon leads her to trespass into the house of her reclusive neighbor, Hana, who has apparently been staying home from school as a sort of shut-in.  Hana reveals that she knew the person Alice is researching, and excited by the prospect of adventure, they team up to find out the truth.

What makes this fairly straightforward tale so special is how well-crafted its characters are, and how it smoothly avoids falling into any over-simplifications of the people in the story, even less important ones.  There is more than meets the eye with everyone here, even the popular chick; in other films of this ilk, she’d be the bratty, spoiled antagonist, but here, she has a moment of real candor with Alice.  Alice is delightfully adorable, but is also a real kid, and therefore has moments of pettiness, or short-sightedness, or downright silliness.  Although a bit shy at first, she’s endearingly tough, and doesn’t take anyone’s shit.  Early on, one of the boys in her class picks on her when they’re both alone and immediately regrets it, as Alice proceeds to knock him off a fence and beating the living tar out of him.

Both she and Hana are expertly voice-acted, and that might be the key as to why it was animated; Iwai used the same actresses to the voice the girls who originally played them, and while they can still make themselves sound the same, they obviously no longer look the same, so animating the film (mostly using rotoscoping techniques) removed that as an issue and allowed him to bring back the same leads.  And it shows, as the two have wonderful chemistry together, and seem perfectly matched in their ability to bring some pretty insane hijinks upon themselves.

The film is beautifully animated from start to finish, and accompanied by an enchanting score written by Iwai himself.  It made me miss the years when losing track of time for a day or several was an option, and sparked a desire in me to hop onto the nearest train to wherever, just to see what might happen.  Maybe I’ll have to arrange a time soon to indulge that instinct again.  Age is, after all, more a state of mind than anything else.