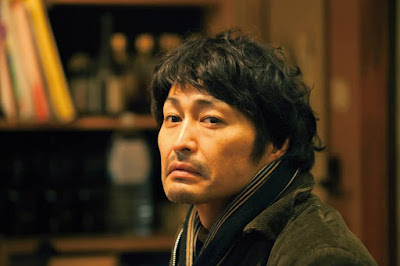 Few movies I saw at Nippon this year defy conventional approaches quite like The Actor, which seems aggressively content (and I realize that sounds paradoxical- this film has that effect on a viewer) to spin around on itself into seeming oblivion.  Like many of the most interesting films to dissect in a group setting, it is something impossible to pin down.  Is it a love story?  Only at the thin margins.  A commentary on filmmaking?  In bits and pieces, sure.  A dream-like meditation on continued existence?  In some of its best moments, yes.  But to analyze further than that is probably inadvisable.

The actor Takuji has become something of a minor legend within filmmaking circles by being the consummate stand-in professional.  He has a particular talent for dropping dead in the most convincing fashion, enough that he’s often called on to demonstrate for recalcitrant leads.  Yet despite the regard many in the business have for him, his lack of major speaking roles to his name means he’s not particularly famous or well-known.  But he never seems terribly bothered by this- he is mostly content to drink (a lot) and do his shoots.

Ken Yasuda’s performance in the lead role is a masterful bit of underacting- he carries a seemingly permanent frown etched into his face, and his every word and movement speak to a life spent quietly in the shadows of others.  Ironically, much of his fame derives from a constant side-effect of his boozing- often drunk during shoots, he often ends up forgetting the elaborate directions given him just minutes before and improvises wildly, often to his physical detriment, yet always in ways that the director and crew love.

He is constantly told that his acting blurs the lines between art and reality, and this repeated phrase echoes the blurred lines between what’s really happening in the film and the times we slip into his dreams and fantasies; by the halfway point any semblance of narrative structure breaks down, and we seem to be floating freely inside Takuji’s own mind.  References to movies he love will suddenly shift to scenes from the film with him in them, and news items mentioned earlier in the film come back to play a part in the third act (including a bizarre returning gag involving the Lisa Nowak case from almost a decade ago; it’s one of the strangest tie-ins for a joke I’ve ever seen).

For much of the film I felt forcefully reminded of The Big Lebowski, if it had even less story and what little story it did have made even less sense (if that’s even possible).  There are some whisperings of a redemptive love story for the clunkily lovable Takuji when he meets a sweet bartender in a small country town during a shoot, but that too comes in and out of focus according to the whims of Takuji’s alcohol-addled mind (which I found a shame, because her scenes are among the highlights of the entire movie- her presence would have only benefited it further).

This is also a film that could serve as a bit of a case study in the tendency of Japanese cinema to allow for much longer shots and scenes that most Western audiences would be willing to endure, and this will likely make the film unbearable for some.  The film does drag more and more towards the end, sometimes to its detriment, but there are still moments of real magic- a scene where Takuji plays out an audition for his favorite director alongside shadows projected on the wall behind him is simultaneously one of the most powerful and moving parts of the film, and also the vehicle for one of its funniest punchlines.

It may seem a bit too esoteric for some, but I enjoyed being carried along by the strange and consistent misadventures of Takuji.  I find him to be a reminder of much of the drudgery and invisibleness that accompanies many lives devoted to art.  But there is still meaning to be found in it, even its rewards are few and far between, or are only ever as simple as a quiet drink at your favorite bar.

And the actor always abides.