Nippon Reviews: A Lullaby under the Nuclear Sky

A Lullaby under the Nuclear Sky: Directed by and featuring Tomoko Kana.  Running Time: 69 minutes. 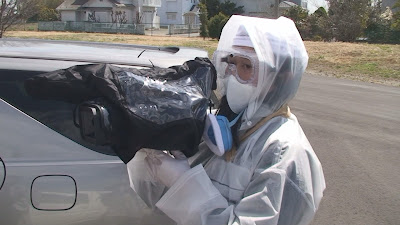 Great cinematic documentaries are able to bring across to their viewers an understanding of true stories that, in the details, seem almost too incredible or “storylike” to be real.  Doing so is not an easy task.  It’s also particularly difficult for a filmmaker to turn their cameras around and make themselves the focus of a movie without it coming across as gratuitously self-serving or egotistical.  Every now and then, however, someone with the right story, right pathos, and right amount of humility comes along who can pull it off.  Tomoko Kana is one of those people.

In one of those strange twists of Fate that seem almost too strange to be coincidence, Tomoko was born almost exactly 40 years before the disaster at Fukushima Daiichi, on the very same day the plant began operating.  This sharing of a birthday, plus the fact that, as a resident of nearby Tokyo, she had been partially dependent on the plant for electricity most of her life, led to her feeling that she had a very personal stake in the story of the disaster and its fallout.  For her, responsibility for the event and its horrible aftereffects went far beyond just the electrical company or the government- everyone in the region, and indeed the whole country, who used nuclear power were culpable.

With such a powerful sense of responsibility pushing her, she immediately starting working on a new film project about the disaster and the initial efforts by both the government and the electric company TEPCO to cover up just how bad the situation was.  She began interviewing survivors and forced evacuees from the 20-km radius around the plant, and soon found a couple that agreed to take them into their ruined house and factory inside the zone, despite the danger of exposure to radiation.

Up to this point, the tearful videotaped stories of the forced evacuees and scenes of utter ruin inside the zone, as well as piles of rotting corpses of farm animals abandoned by their owners after the meltdown, would in and of themselves be more than enough material for years’ worth of documentary features (and undoubtedly will be for some time).  But for Tomoko, her original plans for the film were thrown in the air wholesale right after her day-long trip inside the zone.  After lying in bed ill for days afterwards, she was informed by the doctor that, much to her surprise and shock, she was pregnant, and indeed had been so for several weeks prior to going into the radiation zone around Fukushima.

Having previously assumed that she could likely never have kids for health reasons, any joy or relief Tomoko and her husband felt upon hearing this news was shaded by overwhelming fear and guilt.  What if she had not only damaged her own health, but that of her unborn child by entering the radiation zone?  Her worries were only heightened in the coming months, as it was first revealed that the amount of radiation leaked by the reactor was higher than previously known, and her own hometown of Tokyo was still getting much of its food shipments from the regions close to the radiation area, further increasing the likelihood of increased exposure for not just Tomoko’s child, but all children in that part of Japan.

From this point on, the rest of the film mixes Tomoko’s increased activism in coordination with other parents and health groups pushing back against official assurances that all was well, with the increasingly painful struggles of her pregnancy.  For much of her carry time, she was wracked with immense pains and sicknesses, and having never been pregnant before, she became increasingly terrified that she was suffering radiation sickness that would, in some way, do great harm to her child before it even had the chance at life.

While the parts of the film dealing with the greater issue of nuclear fallout and the effects of 3/11 on Japanese society could easily stand on their own as powerful filmmaking, what makes the film great is how seamlessly Tomoko intersperses it with her own story.  Her own take is made more potent by how wholly she shows herself on camera; we see her weakened, hurting, beaten down, so sick that she can’t even rise from her bed.  They are the sort of moments that many experience in one form or another, but that most would never want others to see.  That Tomoko opens herself to us so much, conversely, makes her seem all the stronger, more human, and more powerful as a result.

At just over an hour, this film is a marvelous example of how to perfectly use the time you have to pack a film with information, emotion, and pathos.  Tomoko seeks to add her voice to the growing chorus of criticism of how nuclear power and government transparency are handled in Japan, and looks to amplify the voices of those usually too small or weak for governments to pay attention to.  With A Lullaby under the Nuclear Sky, she has succeeded brilliantly.