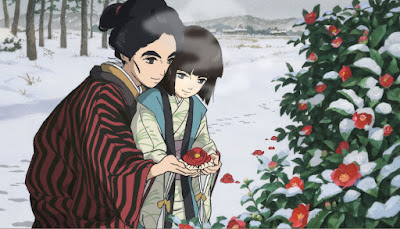 Being the animated story of the daughter of an artistic genius in the highly-patriarchal setting of 19th-century Japan, featuring homages to some of the most famous images created by the real Hokusai, it’s films like Miss Hokusai that hit all the right sweet spots to grab my attention and get my butt in a seat.  Adapted from a manga by Hinako Sugiura, the film is less of a focused narrative and more a series of vignettes of art, life, and society of Japan in the last days of the Tokugawa Shogunate.

Hokusai himself was a real person, creator of some of the most internationally famous images of Japanese art (think of that famous wave portrait your pretentious roommate hung a poster of in your college dorm), but this movie focuses less on him- he’s already an established legend when the film opens- and more on his daughter Oei, struggling to find her own artistic style and develop her abilities enough to live up to her father’s status as one of the greatest painters in Japan.  She casually boasts in the beginning that they both have neither the time nor the inclination to clean, so they simply move from one apartment to another when things get too dirty.  They have two other constant roommates- Ikeda, himself an aspiring painter, albeit one of far less talent, and a small dog.

The movie should definitely be taken as very loose historical fiction (although, from what I’ve gathered, Oei was indeed a real person, and did follow in her father’s footsteps).  Its lack of connective tissue between its component short stories might seem off-putting, but this is partly alleviated by how breathtaking the animation is (and is further proof of my longstanding argument that everything- especially snow- is better animated).  The idea that art is something that lives and breathes, that forms a parallel world that only a truly gifted artist has access to, fills many of the movie’s key moments.  In many segments the painting or drawing in question comes alive, or is so powerful as to infect the dreams and nightmares of people near them.

There are some amazing sequences involving moving, living artwork, touching on the mystical and spiritual side of artistic creation, but the real heart and soul of the film is the relationship between Oei and her younger sister.  Apparently blind and sickly since birth, the strain of her disabilities and illness apparently drove Hokusai to leave her alone with her mother.  While no one seems to hold this against him (at least not too much), Oei seems partially determined to offset this by being all the more loving towards her.  She plays with her, eats with her, and takes her out to her favorite bridge to let her get at least some taste of the larger world she can never fully experience.  These parts are infused with a palpable sense of love and care, brimming over with small moments of familial devotion.

In fact, the atypical family dynamics at play might be the most fascinating part of the entire film.  Oei smokes, drinks, swears, and fiercely takes her own approach to her art, which in and of itself puts her at odds with the popular image many have of repressed women in the 19th century.  It’s almost breezingly refreshing to see how she and her family defy the norms of nuclear families that have just as long a history in Japan as they do in the West, including the parents living a separation caused by the difficulties of childhood disability.

The disjointed nature of much of the film does pull its strengths apart a bit, sadly, partially aggravated by the film’s score.  The music is mostly classical in style, and is indeed what you would expect from this sort of period piece, but in two specific scenes, for no reason I could fathom, it shifts into electric guitar rifts that create a bizarre juxtaposition (to put I mildly).  It’s a weird mixup that doesn’t mesh well with the rest of the film, and unfortunately highlights how many of its parts fail to gel into a cohesive whole, although nearly all are excellent in isolation.