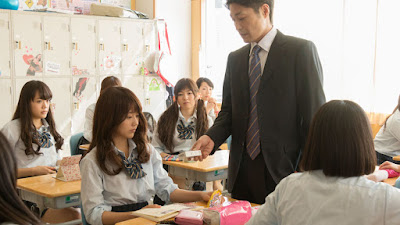 Is it ever too late to start again?  Can a dog really be too old to learn new tricks?  Sometimes, it seems a person has fallen so far behind in their life that no amount of effort or willpower can overcome the effects of past mistakes.  And sometimes, a person in such a situation tries anyway to overcome them, in spite of all the odds stacked against them, and remake their future.

Based loosely on a true story, Flying Colors, from director Nobuhiro Doi, is the story of Sayaka, a teenager who has spent nearly all of her school life up to now doing little else other than partying, ignoring teachers, and trading makeup and boy tips with her cadre of similarly-unmotivated girlfriends.  There are a lot of reasons why she’s dropped in class as far as she has, the biggest probably being a lack of attention to her studies at home; her father is solely obsessed on turning the only son in the family into a baseball superstar (and to hell with whether he wants to or not), and early on wholly abandoned any involvement in the lives of Sayaka and her younger sister, leaving their overstretched mother to try and make ends meet for the three of them.

When her grades truly hit rock bottom, her mother takes her to a cram school, headed by an eccentric young teacher named Tsubota.  Convinced that anyone can succeed in studying with the right approach, he convinces Sayaka that she is smarter, more talented, and more capable than she thinks (and certainly more than her bully of a schoolteacher thinks), and that her mother’s faith in her is well-placed.  Feeling truly inspired for perhaps the first time in her life, she finally buckles down and sets her sights on getting into a program at one of the those prestigious Tokyo universities.  From there, it’s off to the races, as Tsubota confronts one mental obstacle after another in trying to overcome Sayaka’s years of intellectual neglect, and both try to push back against the overwhelmingly loud and insistent voices of those around them that they are on a fool’s errand, and Sayaka will amount to nothing.

In the main, this is much like many similar teacher/classroom-style animes or mangas (think Assassination Classroom for a not-too-unapt example); a student comes in with low hopes and expectations, and oddball and eclectic teacher with strange methods believes in them, and through trial and error they forge a new path forward.  It’s cute, and often very funny, and certainly provides some great moments of real pathos for its characters, but ultimately we’ve been here before, and there aren’t a lot of surprises in store for engaged viewers.

If there is one thing that drags the film as a whole back, it’s the number of “fakeout” climaxes it has.  As I understand it, the Japanese school system has a fairly complex testing system for admissions into universities and individual department programs, with passing grades in several rounds required to gain ultimate admission.  We follow Sayaka through each one of them, which would be fine if not for the fact that every single one of the tests is followed by an extremely drawn-out sequence of her waiting for her results; her sitting nervously in front of her computer; waiting about 5 minutes before clicking on the “get grades” button; a shot of her staring in shock; another of her running/biking/driving somewhere with the same shocked look on her face, neutral enough that you can’t tell if the news is good or bad; her arriving at home or at the teacher’s office; and THEN we get to find out what the test results.  And then on to the next round!

This might sound testier than it should, but it’s really the only substantial problem with what is otherwise a solidly enjoyable film, which made it stand out all the more, since it’s the biggest reason the later parts of the film feel a lot slower than the beginning.  As it is, I’m afraid I’m grasping a bit to try and find more to say about the film.  If you like this kind of scrappy-underdog story, then this will provide you with a lot of laughs and maybe even a few tears.  If not, this might not be your new favorite film of the year, but there’s enough meaning and heart in it that giving it a watch would not go amiss.