Nippon Reviews: Kishibe No Tabi (Journey to the Shore) 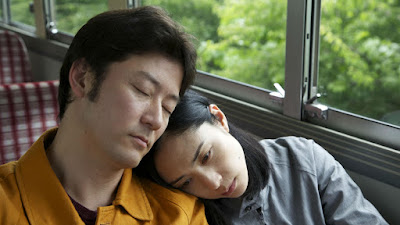 Ghost stories are as old as the art of storytelling itself, and if there’s one thing that connects them all across time periods, cultures, and styles, it’s that most tend to emphasis the otherworldly nature of these apparitions, presenting them in some way that ensures they look and/or sound like something foreign to the land of the living.  Horror is the most common genre wherein the dead regain their voice.  However, in his latest film, Journey to the Shore, Kiyoshi Kurosawa (himself no stranger to the realms of either the horror or the ghost) takes a markedly different tack from your standard apparition fare, and indeed from many of his more typical past works.  Presented with the question of whether or not live actors, unaltered with makeup or effects of any kind, could effectively function as ghosts within a story, he decided to use his latest film as a vehicle to explore how far this concept could go.

Mizuki has struggled to manage living and teaching piano alone for three years since her husband Yusuke’s disappearance, when he quite suddenly reappears in their home one night.  The catch, of course, is that he is long dead, so what has returned is his spirit, at least in some form.  Saying that it took him so long because he had to walk (the dead move just as slowly as we do, apparently), he reveals that he apparently had quite a few adventures along the way back, and asks her to accompany him on a trip back to see some of the people he met.  Why are they traveling, and where are they going?  He never says, other than that he wants to show Yusuke “someplace beautiful.”  Thus begins a trip of several parts, as Mizuki and Yusuke try to deal with unresolved issues from their marriage, learn about the personal demons plaguing the people they meet, and Mizuki tries to find answers to her unspoken question; how, in God’s name, is she supposed to go on living?

It would be easy to get hung up on questions about the spiritual mechanics in this world, which I must recommend you avoid, since it’s wholly secondary.  As it is, how being a ghost works is never fully explained- they can eat and physically interact with the world as much as anyone living, and appear to be completely normal.  According to Yusuke, it’s really only other ghosts that can tell when others walking around are “like them.”  So it’s best to just accept what the movie offers you as that regard and get on with the rest of it.  If anything, not knowing all the “rules” about ghosts in this world makes our interactions with them in the film all the more disquieting, since you can never he wholly sure what will happen next.

Korusawa has been praised in the past for his masterful use of lighting to establish tone, and his immense skills are on full display here.  Several key moments hinge on how the lighting starts off at one setting- say, bright and luminescent, or nearly pitch-black, to name a few- and will suddenly shift into something else entirely, sometimes causing a complete 180-degree turn in a scene’s tone.  In lesser hands this is the sort of trick that could spin wildly out of control, but Kurosawa’s hands at the wheel are steady ones indeed.  Bright light, either heavenly white or richly green, is ever-present, and the very concept of light and what exactly light is (or is not), eventually becomes a central theme.

This is not a horror film, so don’t go in expecting to be scared, but Korusawa’s influences from that particular field are still quite noticeable.  The atmosphere of the film can’t help but feel frighteningly tense at times, with how the long camera work immerses you enough in the moment that you truly don’t know what will happen next, and whether it will be something good or bad.  A particular sequence involving a forested waterfall delivers a potent mixture of worry, uncertainty, and dread about the fate of several characters.  The dichotomy between the more uplifting tone of much of the film and the more horror-esque elements that occasionally come in clashes at times, perhaps deliberately so.

This movie is a remarkable and affecting meditation on the nature of life and death, and on the importance of continuing on despite how hopelessly small and short human life seems to be at times.  It’s a large universe we live in, and perhaps we do, in the end, consist of nothing of substance.  But that doesn’t make our efforts to love and enjoy what we have futile- quite the opposite, in fact.