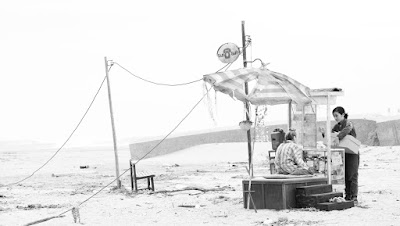 The Whispering Star bears some remarkable resemblances to the arthouse hit Under the Skin from a few years back.  It’s a sparse, slowly paced, terse, and gorgeously shot observation of humanity from the outside.  The eyes through which we see ourselves anew belong to a character clearly not human, yet required in some unclear capacity to interact with them, and over the course of the film this figure’s experiences with humanity blurs both her perception (if indeed it is a her) and our own of where the line between being human and being something else can be drawn.

“Her” name is Yoko, an AI living in a time when both robots and humans have spread throughout the cosmos.  For reasons unexplained, AI’s have long started to greatly outnumber humans, and the remainder live in tiny groups on a handful of planets in the galaxy, with only one left inhabited solely by humans.  Yoko flies a rented space shuttle, amusingly designed like an old-style Japanese house (occasional shots of it puttering through the stars got quite a few laughs at my screening), which she uses to deliver packages to various customers on different planets.  She explains to us eventually that this is something unique to humans- the AIs neither send nor receive mail- but the purpose and meaning behind such activities remain a mystery to her, although she has her guesses.

We do nothing more or less than follow Yoko on her deliveries, meeting a handful of strange people all living in ruins- buildings, streets, houses, and factories literally lying in pieces and left to rot.  It must be mentioned here that the filming was done in areas within the still-empty evacuation zone around the Fukushima nuclear plant, so the inside of the space ship is the only artificial set on screen- every other locale is a real place of unrepaired devastation from the tragic events of March 2011.  What this simple fact adds to the film’s central themes of destruction, devastation, loneliness, and of the tenuous resilience of hope even amidst such horror is difficult to overstate.  As the film’s opening reminds us, “human life is just a flicker of a candle flame,” and every glimpse we get of the destruction only reminds us of the fact.

When not experiencing Yoko’s strange encounters with people, we observe, in minute detail, the unending routines and monotonies of her life inside her tiny, one-room ship.  Few films have so powerfully conveyed to me a sense of the emptiness and vastness and loneliness of space.  With literally nothing outside, we become very familiar with the interior of Yoko’s ship, with its contours and spaces.  Music is extremely sparse, and other than a single, breathtaking instance, the entire film is shot in crisp black-and-white, which only seems to accentuate every on-screen detail, The utter lack of color enhances the abject emptiness of much of what we see, quietly adding to the dreary blandness of everyday life.  Apparently Yoko kept an audio journal for some time after she started traveling, but abandoned it at one point, and a scene of rediscovery of the old tapes is the first suggestion that something within her might be changing since she started having more and more contact with people.

This is one of those films that most would likely not enjoy, or even be able to sit through.  The stunning imagery aside, there is a very large amount of time that consists of nothing happening, the sort of thing that many casual viewers assume is the entirety of the “arthouse” and “indie” film scenes- all pretty technical show, with no depth to it and nothing of use to anyone to say.  And The Whispering Star is certainly not an easy viewing experience, and it doesn’t beg to be liked, or even understood.

And yet, it has stuck with me in a way I can’t quite describe.  The ending still haunts me.  If there had been nothing different to the last portion of the film, I would likely have rejected the whole as, indeed, being all arthouse and no show.  But the long hours spent in the empty void of space and amidst the destruction of Mother Nature is building up to Something.  What that Something was for me might not be what the Something is for you, but it’s a journey worth taking, just to find out what it is.