Nippon Reviews: Along the Sea 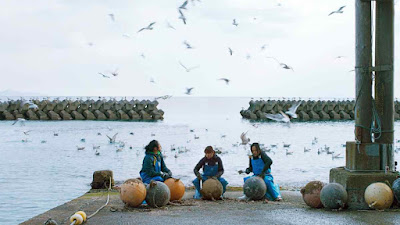 Akio Fujimoto came out of the gate swinging with his 2017 debut film, Passage of Life, which largely focused on the trials and perils of illegal migration as viewed through the eyes of children. With his second film, Along the Sea, he uses the same basic filmmaking style to examine the same topics, but this time through the eyes of women. Given that women, like children, are often forced to bear the brunt of the costs of the decisions of the "adult" men running most of the world, this makes Fujimoto's first two films essential companion pieces to each other.

The three main characters of the story are young Vietnamese women, traveling together, who arrive at a coastal town for seasonal work cleaning, sorting, and packaging freshly-caught fish for sale at nearby markets. It's never clear exactly how old they are and how often they've done this, but it seems to be fairly regular for them, possibly something they do every year. Their contact finds them the most basic and barebones of accomodations (and it's the middle of winter, so that means hardship), and outside of food and other basics, it seems nearly everything they earn is sent back home to their families, whom they call often to reassure that they're ok, and yes, more money is coming.

One of them, however, quickly starts to seem quite ill, which immediately hammers home the degree to which every moment of their lives exists on a razor-thin knife's edge. They're not supposed to be there, so any usual paaths to doctors, medicine, or anything else are closed to them. They are there to work, period, and if they don't work, no money, period, so the very idea of even a little head cold taking someone out for a day is a crushing inconvenience.

They are friends and in this together, though, so even though it is stressful and pulls at their bonds somewhat, the other two do what they can to help their friend pull through, even offering to cover for her at work for a little while. As it turns out, though, it's not that simple- their friend isn't ill, she's pregnant, which in all practical terms is about the worst thing that could happen to her right then and there. The choice she now faces is literally life or death in several different ways, and even her friends can't help her as she tries to figure out what in the hell she's supposed to do now.

One of the biggest strengths of Passage of Life was how Fujimoto used minimalism and a mostly handheld filming style to lend a natural realism to the film. This was further enhanced by the easy repertoire between its cast, many of whom I gathered were not professional actors. The same style is at play here and it makes Along the Sea equally affecting. Most of the scenes in the middle and end involve us simply sitting with or walking alongside a woman, alone and terrified and at the mercy of a world ready to chew her up and spit her out, and she damn well knows it. Right up to the end, there is no clear sign where things will go, where they can go, just like with our own lives.

Fujimoto has proven that Passage of Life was no fluke and that he has the talent and storytelling courage to have staying power, and I very much hope he continues to use it to such important effect. This is simple, barebones filmmaking, but it works so damn well it reminds us why film as an art form is still so essential, whether or not theaters are open. I don't know when or how this film will be made widely available, but I hope it will be, and soon.