Films for the Trump Years: All The President's Men 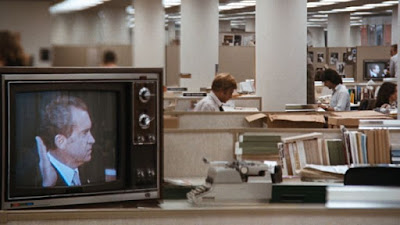 It has taken me far too long to get to this one. Part of this was that I didn't want to be so immediately obvious with my picks for this series, but another, bigger, part of it, especially in recent months, was simply a dearth of time, forcing me to constantly push back my writing schedule. Now, though, I make no further excuses. After nearly two years of an unending stream of revelations about the historical level of corruption in the Trump Administration, aided and abetted by every figure of consequence within the GOP, let's talk about everyone's favorite, go-to historical comparison. Let's talk about Watergate.

Directed by Alan J. Pakula, with a screenplay by William Goldman, the movie is directly lifted from the non-fiction book of the same name that chronicled the investigative work of Carl Bernstein and Bob Woodward following the Watergate break-in that, eventually uncovered a massive and long-running network of wrongdoing that forced the first (and thus far, only) resignation of a President in US history. Starring Robert Redford as Woodward and Dustin Hoffman as Bernstein, the movie saw plenty of immediate success upon release. It was nominated for 8 Academy Awards, including Best Picture, and won 4 (Art Direction, Sound Design, Screenplay, and Best Supporting Actor for Jason Robards). Since then, its stature has only grown- it continutes to regularly appear on various "Best of" film lists from the late 20th century, and it is among the relatively few works selected for preservation in the National Film Registry.

With all that pedigree attached to its name, and with a subject matter so heady, it's easy to approach the film today with a particularly high amount of skepticism, especially since the film defies much of the dramatic bells and whistles that later takes on this sort of journalistic film try to use to raise the stakes. There are very few moments that are conventionally "cinematic," with a rising score, quick editing, or a fast-moving camera. The movie is steady in its approach towards and depiction of real journalistic processes, and thus consists mostly of people just talking, often about names and ideas and organizations that seem incredibly obscure and vague for most viewers.

In the end, though, this all fits in with the focus of the film, and with what makes it still stand out from others within this genre; the lack of artificial drama allows the movie to focus on the actual story all the more. Redford and Hoffman, being as good as they are, are able to tell us bits and pieces about who these reporters are as individuals, but there is never any focus on that, because that's not what's important. What matters more is examining the sort of corruption they found and providing an example of the sort of work needed to bring the truth to light.

And it's not just all dialogue; the cinematography is expertly crafted, using a lot of distant, long tracking shots to convey a sense of size and scale of the huge apparatus that is the US government, the smallness of two reporters compared to a massive and (at the time) very mysterious corruption racket surrounded and threatening to silence them. It's easy to get lost in such large, sprawling, winding buildings, if you aren't careful.

This careful use of shot composition reaches its zenith in the final moments of the film. It's easy to forget that Watergate was a long process- the break-in and initial investigations were in the summer of 1972, BEFORE Nixon was reelected, and were still ongoing throughout the campaign and after he won in a massive landslide. The ending of the film deliberately focuses on this moment of seeming defeat instead of ending with Nixon's ultimate downfall; in the last scene, a television airing Nixon's exuberant reelection speech is in the foreground of the shot, with Woodward and Bernstein behind and in the right side of the frame, at first out of focus, but still diligently working away at their typewriters throughout the speech, not once looking up.

I found this choice to be incredibly powerful, the sort of silent testament most of this film's imitators have never been able to equal. Yes, there have been setbacks and losses, and in the wake of a triumphant reelection, it may have seemed obvious to many that any further efforts to uncover the truth would not change anything, or would just be waste of time. We know now, of course, that the true reckoning was still to come, but it only came about because enough people, Woodward and Bernstein included, refused to give up and insisted on airing the truth in the light of day.

Obviously, it's not possible to talk abot this movie without adressing the famed scenes with Deep Throat (whose identity, long a secret, was revealed a full three decades after the film's release). This is easily the most well-known and most thoroughly parodied part of the entire film, so iconic that it's nearly impossible to try to experience the scenes on their own merits. They are certainly a touch on the hammy side, and the character is played up as being something of a mysterious mentor-like figure rather than one individual in a large chess game with his own goals and interests.

Nonetheless, I still found the whole dynamic around his character an effective refute to the hope of some that, in our current times, lifelong employees of the "deep state" will be able to save us via a supposed ironclad commitment to the Constitution. If anything, the dynamic within the FBI and CIA that Deep Throat reveals is exactly the opposite- that the "deep state," insofar as it exists, tends far more towards not rocking the boat, even when that boat is headed off a fucking waterfall. And that famous line, engraved in American film canon, "Follow the money," has remained powerfully prescient; it was, indeed, through following chains of checks and bank accounts that much of Nixon's blackmailing apparatus was revealed. And when we look at the news today, what are the revelations that brings out the clearest signs of panic in Trump? Anything touching his tax returns. Oh, and how history repeats itself.

Though certainly not perfect, All The President's Men still remains a powerful testament to how hard work and ceaseless diligence can still bring out a few rays of good into a world that seems to be drowning in darkness. It reminds us that apathy and willed ignorance remain defining parts of human society; so many people in the movie shrug their shoulders at the reporters' questions and insist they were "just following orders, and what's so wrong with a little loyalty?" In the midst of the Watergate scandal as it was developing, it was easy to feel that evil was getting the upper hand, that a particularly bad election had killed any chance of the truth meaning anything at all. Yet, because enough people refused to quite, the ultimate fall ended up being all the greater and more shocking.

It is up to us to learn from the example set by Woodward, Bernstein, and their colleagues at the Washington Post to ensure that the current regime, one that would make even Richard Nixon blush, meets a similar (or preferably, even worse) fate.

Previously on Films for the Trump Years:

Part 14- Do The Right Thing