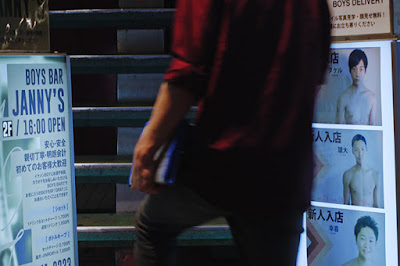 For all the progress we’ve made in recent decades raising general awareness of marginalized groups around the world, the field of sex work still remains fairly underrepresented and unexamined within cultures at large.  This is especially the case for male sex workers, who often have to deal with their own particular gender-related stereotypes on top of the more general ones associated with selling your body for money.

Boys For Sale, a new documentary directed by Itako (his first feature film) and produced by Ian Thomas Ash (previous winner of the Nippon Visions Jury Award and the Nippon Visions Audience Award), directs its attention straight at the heart of these tangled preconceptions surrounding an often-forgotten world.  It is perhaps the first film to delve into a particular subset of Asian gay culture within a particularly conservative country still struggling with the idea of open homosexuality, and is one of the best documentaries to air so far in 2017.

Within Shinjuku 2-Chome (yes, there’s a reason the area is called that), considered the gay center of all of Asia, specific bars and locales offer their (male) customers the services of their urisen.  This term applies to young “boys” (the majority are in their late teens or early 20’s) sold off nightly to customers and taken to specially-prepared rooms, where they are then expected to perform whatever sexual acts that particular customer desires.  Officially, prostitution is illegal in Japan, but the laws as they currently exist define sex work as being between a man and a woman.  By ensuring that their clientele are all men, managers of these establishments are able to thread this fine legal loophole without facing any real legal threat.  They further limit their own culpability by insisting that the prices paid for their urisen are only for drinks, dinner, and time spent together, and whatever may happen (or not happen) between the boys and their buyers in the upstairs rooms is none of their business.

The finer points of this world- its rules and traditions, how it operates, how these young men are selected and end up in this line of work- are explained to us through a series of interviews with current and former urisen.  They were all given the choice by the director of having their faces and voices shown unaltered and hiding their real names.  Some hid nothing, others wore masks to at least cover their faces and took a codename, and others not only hid their faces, but also asked that their voices be altered as well.  Their respective ages, backgrounds, and views on what they do vary widely, and for the most part the film simply lets their astonishing tales speak for themselves.

Sex workers in general have an endless variety of motivations and reasons for getting into prostitution- many choose it willingly and are happy doing it, some are pushed into it through chance, circumstance, or even tragedy, and some are actively tricked and/or enslaved- and urisen are no different, although the “hush-hush” nature of how the industry operates means there is often an extra level of deception in pulling the boys in.  Many admit in their interviews that they had no idea beforehand what was expected of them, or were actively lied to when they first interviewed about what, exactly, they were getting into (one bar manager, interviewed in the film, obviously denies this).

Perhaps one of the most fascinating details provided in the film (for me, at least) touches on Japan’s still-considerable discomfort with the very idea of homosexuality, at least compared with Western cultures.  Being openly gay in any setting, even within the world of male prostitution, is still considered so strange or taboo that, while many gay men do work as urisen (and most of their clients are clearly either themselves gay, or at least not entirely straight), it’s still silently frowned upon to work as a urisen and be openly gay; most managers (and clients) expect you to at least pretend that your straight, which opens up a whole other realm of discussion about human sexuality, psychology and behavior that I don’t have nearly enough room to get into here.  Suffice it to say this is one of those films loaded with enough material for hours upon hours of discussion after seeing it.

Perhaps the most inspired creative choice in the film was the decision to use drawings to depict what sort of acts the boys do.  The film’s creators decided early on to not even attempt sneaking in cameras to film actual customers with the boys, and this is crucial to the film’s power; the use of drawing allows the movie to delve into frank, graphic detail about everything the boys do in their rooms without running the risk of being voyeuristic or pornographic.  Given the importance of hearing these stories, and all the problems and challenges raising awareness of these people brings, being able to walk this fine line is essential to the film succeeding as well as it does.  Giving critics fodder for accusations of exploitation could have easily derailed the entire project.

The film’s music plays an equally remarkable role in enhancing the feel and atmosphere of the movie.  It’s rare enough for a documentary to have its own decent score, and even rarer for it to be as powerful and noticeable as it is.  It’s a dynamic and energetic score that adds a great extra vibe to every scene.

Another particularly powerful aspect of the movie is its reminder of how major disasters, both man-made and natural, have a particular ripple-effect in the field of sex work.  One of the interviewed boys openly says that he only ended up as an urisen because he came to the city desperate for work after losing his home in the tsunami/Fukushima catastrophe of 3/11.  If that had never happened, he would never have even considered getting into sex work, and he is certainly far from the only person of his generation with similar reasons for becoming a prostitute.

Even after several weeks of thought following the film’s premiere, I find it extremely difficult to quantify my feelings on this topic.  Are these boys slaves?  Victims?  Mere cogs in the machine?  Would better regulations and more government more oversight help?  There are many former urisen working within Shinjuku 2-Chome who lament Japan’s severe lack of general education regarding STDs and safe sex.  Given the dangerous (and potentially deadly) effect this can have within the field of male sex work, many of them work hard to push back against the sort of ignorance that can allow diseases like HIV to spread.  More and more celebrities within Japan are also speaking openly about being gay, and this could, perhaps, prompt a larger cultural shift that will allow these people to be more open about their work and get better government support.  But that, too, is far from a given.

Beyond the very important worries about safety and health that viewers should take away from this movie, what should I feel about the boys themselves?  Yes, many of them were tricked or forced into doing this work, don’t like it, and want out, but many are perfectly content to be urisen- they have a community of their own that binds them together, and many of them, even ones that aren’t gay or bi, very much enjoy the work and are happy doing it.  But how do we reconcile that with the obvious and real exploitation that runs rampant within the industry?  And what’s the proper response to this?

These are hard questions with no easy or obvious answers to them, and that is precisely what the best documentaries do- strike right at the heart of the thorniest issues in human society, forcing us to grapple with contradictory thoughts and feelings as we try to come to a conclusion about the best path forward.  And feeling such a mixed jumble of feelings and thoughts you have no idea how ro reconcile, however uncomfortable it may be, is one of the clearest signs you've seen a truly great documentary.  Boys For Sale succeeds brilliantly in challenging its viewers to become part of a conversation they may not have even known existed, and it deserves to play a key role our cultural discourse about homosexuality and prostitution.